At least 50 killed by suicide attack on mosque

You are here: Home / Uncategorized / At least 50 killed by suicide attack on mosque
This post was originally published on this site 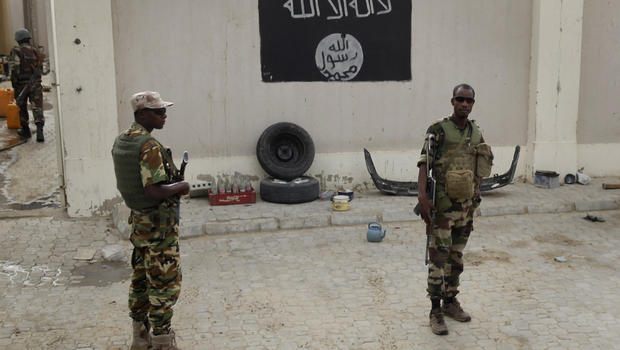 Chadian soldiers stand at a checkpoint in front of a Boko Haram flag the Nigerian city of Damasak, Nigeria, March 18, 2015.

MAIDUGURI, Nigeria — Police in northeastern Nigeria say at least 50 people are dead after a suicide bombing at a mosque.

The teenage bomber detonated early Tuesday in Adamawa state as people were arriving for morning prayers.

Police spokesman Othman Abubakar tells The Associated Press that the young man detonated his explosives while mingling among the worshippers.

While there was no immediate claim of responsibility, suspicion immediately fell on Boko Haram.

The Islamic extremist group is based in neighboring Borno state and has been blamed for scores of similar attacks, including one last week in Borno state which left at least 14 people dead.

In last week’s attack, four suicide bombers blew themselves up in the Borno state capital of Maiduguri, killing 14 and wounding another 29 in one of the largest such attacks in the city in years.

Police said the four bombers also were killed. The 29 injured were rushed to local hospitals for treatment.

While Nigeria’s military has made progress in combating Boko Haram’s deadly insurgency, the group continues to carry out suicide attacks in Maiduguri and elsewhere. The group often uses female or child bombers, some who had been abducted.

The extremist group has defied the government’s claim made late last year that Boko Haram had been “crushed” after being flushed out of its strongholds. The insurgents continue to threaten parts of vast northern Nigeria and neighboring countries. Millions have been displaced in the nearly decade-old insurgency and more than 20,000 killed. The displacement has created a vast humanitarian crisis as hunger remains widespread.