You are here: Home / Uncategorized / Boy in viral bullying video speaks out as mom faces backlash
This post was originally published on this site

An east Tennessee middle-schooler is speaking out after an emotional Facebook video about being bullied. In the widely-shared video, Keaton Jones describes how fellow students poured milk on him and stuffed food in his clothes. Support in the form of comforting messages flooded in for the student over the weekend.

Now, his mother is addressing the backlash on social media over some of her other posts which show her and her son with Confederate flags.

“I had enough of it. They had said that someone was going to beat me up in lunch so I texted my mom and I said ‘what do I do here?'” Keaton told CBS News correspondent Mark Strassmann.

Asked whose idea it was to make the video, Keaton said, “It was mine.”

Keaton, who says he was targeted by five fellow middle-schoolers, said he never complained to a teacher for fear that the bullies would “for sure attack.”

“He became more and more agitated and didn’t want to go back to school,” said Keaton’s mother, Kimberly Jones.

Jones was behind the camera and posted the video to her Facebook.

The spotlight on Keaton also cast attention onto Jones’s prior social media posts including one where she is holding a Confederate flag – a symbol of pride for some, and racism for others. Her daughter’s Twitter also contained a family photo with a Confederate flag. 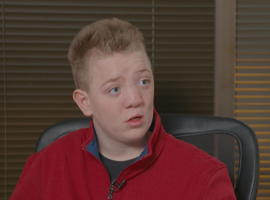 “It didn’t have anything to do with racist intent?” Strassmann asked.

“No. No. Absolutely not. I’ve said I spent most of my life being bullied and judged because I wasn’t racist,” Jones said.

Thanks to the video, Keaton went from a bullied middle-schooler to a boy with friends around the world.

“It made me feel like I had accomplished something real. Something that could actually change the world,” Keaton said of his video.

While the Union County Board of Education told CBS News they “do not and will not tolerate bullying,” Keaton’s middle school is said to be holding an anti-bullying assembly on Monday. Keaton said he doesn’t plan on returning to classes until after the holiday break in January.