TEL AVIV — Cockpit video from an Israeli helicopter shows what could be a new front in the Syrian civil war. Israel shot down a drone that it said the Israeli border from Syria Saturday, accusing Iran of using a base inside Syria to launch the attack. Israel retaliated with a wave of F-16 bombers, and the Syrians fired back, knocking an Israeli jet out of the sky for the first time in 36 years.

“I think both sides don’t want to go to war and the very delicate decisions between escalation and containment will continue to be the main dilemma for the decision makers in Tehran and Jerusalem,” said Amos Yadlin, a former Israeli army intelligence chief.

He’s worried about Iran using the chaos in Syria as a pretext to attack Israel. 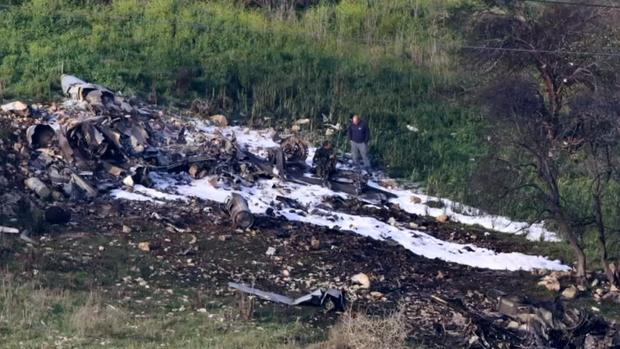 “This is about Iran building a force, a military power and bases in Syria against Israel, and Israel’s determination not to let it happen,” Yadlin said.

Trees in the area were singed when the F-16 crashed and burned. What is so shocking about the location is that it’s more than 60 miles from the border with Syria, meaning the Syrian anti-aircraft missile struck down the Israeli jet inside Israeli airspace.

Israeli Prime Minister Benjamin Netanyhu’s government launched more airstrikes in Syria, which the U.S. staunchly supported. In a sign of how much the usual order has been shaken up, it was Russian President Vladimir Putin who urged restraint, trying to prevent another conflict from igniting amid the ashes of Syria’s 7-year-long war.