You are here: Home / Uncategorized / Fentanyl driving rapid increase in opioid deaths
This post was originally published on this site

A federal report says the powerful painkiller fentanyl was involved in more than half of the recent opioid overdose deaths in 10 states.

The report released Friday by the U.S. Centers for Disease Control and Prevention is the latest to show how fentanyl is helping to make the nation’s current drug epidemic the deadliest in U.S. history.

Most of the 64,000 U.S. drug overdose deaths last year involved opioids, which include heroin and prescription painkillers such as Vicodin and Percocet. About 56 percent of opioid deaths in the 10 states studied involved fentanyl.

Fentanyl is a far more potent opioid than heroin — 50 to 100 times stronger, according to the CDC. It was developed to treat intense pain like that in people suffering through the final stages of cancer, and can be obtained legally with a prescription, but it is being increasingly sold illicitly and mixed with heroin by dealers because it is cheaper.

China is believed to be a major source of illegal fentanyl and related drugs flooding the U.S. market; last week the Justice Department announced indictments of two alleged Chinese traffickers. 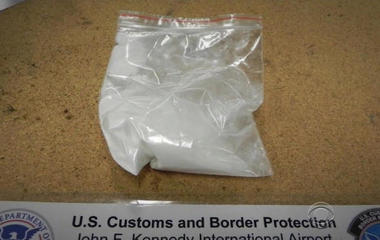 U.S. Customs and Border Patrol seize record amount of fentanyl and other opioids

U.S. Customs and Border patrol officials seized a record amount of fentanyl and other synthetic opioids in the fiscal year that ends tonight. Mos…

The CDC report says fentanyl analogs — drug compounds that mimic its effects — are also increasingly being detected in overdose deaths. These analogs, which are almost always illegal and are not approved for use in humans, include carfentanil, a drug used as a sedative for elephants, which is estimated to be about 10,000 times more potent than morphine.

“Because of its extreme potency, even limited circulation of carfentanil could markedly increase the number of fatal overdoses,” the report warns.

The 10 states included in the CDC analysis are Maine, Massachusetts, Missouri, New Hampshire, New Mexico, Ohio, Oklahoma, Rhode Island, West Virginia, and Wisconsin. Together, they reported 5,152 opioid overdose deaths from July to December 2016, and  medical examiners detected fentanyl in 56.3 percent of those cases.

Fentanyl was most prevalent in the four Northeastern states and Missouri, where it was detected in anywhere from about 60 percent to 90 percent of the opioid-related deaths in the study. 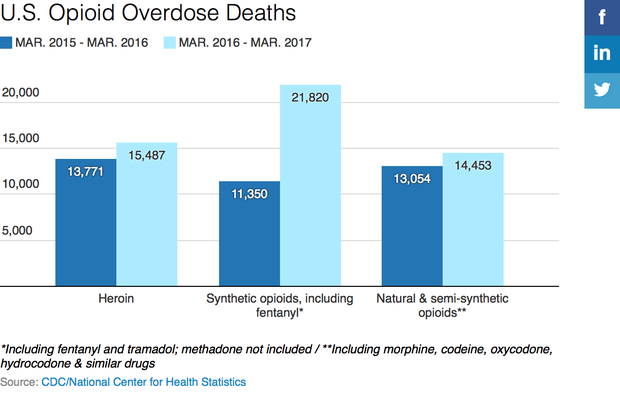 Overall, opioid use has skyrocketed over the past two decades. The number of overdose deaths involving opioids has quadrupled since 1999 — a period in which the number of opioid prescriptions quadrupled, according to the CDC.

On Thursday, President Trump declared the opioid crisis a national public health emergency and directed federal agencies to enact plans to combat all aspects of the problem. However, he stopped short of declaring a national emergency, which would have freed up additional funding, and some critics say the action does not go far enough to address the severity of the crisis.