You are here: Home / Uncategorized / Florida Keys tourism impacted by hurricane-battered resorts
This post was originally published on this site

ISLAMORADA, Fla. — Hurricane Irma is still leaving businesses flat in the Florida Keys, three months after the storm hit the state. The Keys normally attract more than 3 million tourists a year, bringing in nearly $3 billion annually and accounting for more than half of the islands’ economy.

The busy tourist season in the Keys starts the day after Christmas, and there are plenty of things to do – fishing, diving or feeding the tarpon. But the challenge in areas like Islamorada is finding a place to stay. Many of the big resorts remain closed after being battered by Hurricane Irma, reports CBS News correspondent Omar Villafranca.

Sometimes it can be easy to forget Irma was ever here. But the giveaway at a waterfront restaurant is the empty chairs. 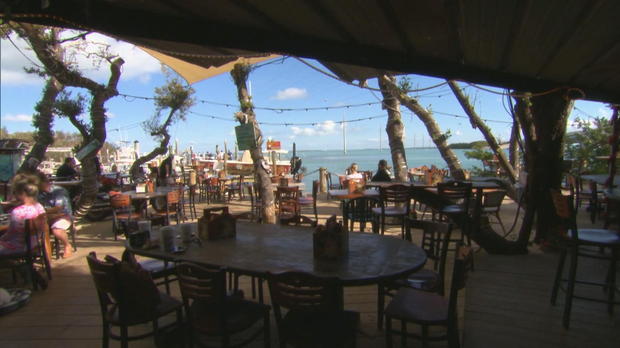 “Tourism, that is the lifeblood of the Florida Keys,” said Andy Newman, communications director of the Florida Keys and Key West tourism council. Tourism accounts for 60 percent of the Keys’ economy overall and more than half of the island’s jobs.

“We’re down about 28 percent in available hotel rooms. Well, you know, if we don’t have hotel rooms… then how can you possibly be up or as busy,” Newman said, adding that it “impacts everybody.”

The problem is most severe in Islamorada, where nearly 70 percent of the hotel rooms are out of commission. Councilman and restaurant owner Mike Forster is feeling that impact.

“You can’t stay here but you can play here,” Forster said. 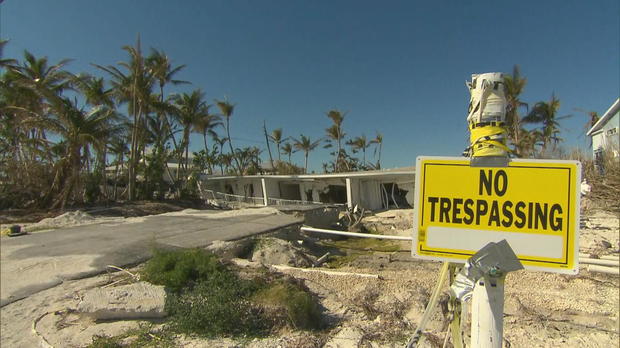 Fewer heads in beds translates to fewer hungry mouths to feed at Forster’s restaurant. His business is down 50 percent.

“Everything we have here is available, it’s ready to go. All the merchants are ready, the businesses are open, but we’re just missing…bedrooms,” Forster said.

Islamorada is the self-proclaimed sport fishing capital of the world. The fish are still biting, but Steve Leopold can’t hook any customers on his charter boat.

“How busy are you usually between the holidays?” Villafranca asked him.

“We’re booked every day. We fish every day. And sometimes multiple trips per day,” Leopold said.

“We have zero,” Leopold said.

In September, the Category 4 hurricane slammed into the Keys with 130 mph winds, destroying more than 1,100 homes and leaving behind $500 million in damage. Resorts have been racing to finish repairs in time for the winter season, but some properties will be closed until next fall.

“You don’t have a lot of competition right now,” Villafranca pointed out.

“Not particularly. Not for rooms,” Zinner said.

“But do you want that competition?”

Mort and Harriet Cohen from California have been visiting the Keys for 15 years.

“Once you get a place to stay, the restaurants are open, the weather is beautiful. It is the Florida Keys,” Mort said.

Some resorts are using this time to remodel to their properties, but some small business owners we spoke with say it may take a full year to recover their losses.