EN ROUTE TO TALLAHASSEE, Fla. — Six days after the deadly shooting in Parkland, Florida, 100 students from Marjory Stoneman Douglas High School boarded buses, taking their fight for gun reform to the state’s capital some 450 miles away. Some students are writing a list of demands, including a ban on military grade weapons and universal background checks. Their passion is palpable.

They arrived at a Tallahassee high school and got long applause late Tuesday.

While the students were on the way to Tallahassee, Florida legislators voted down an attempt to revive a bill that would ban assault rifles. Students said they’re not dettered. 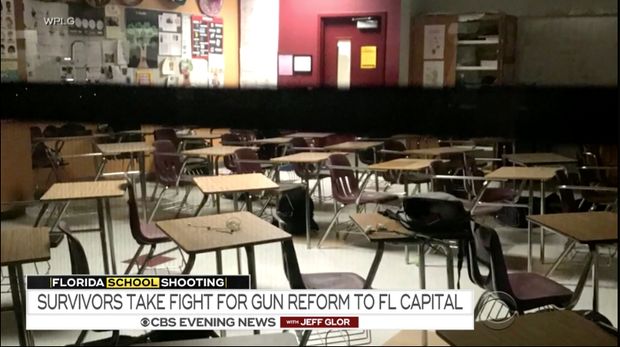 A look inside a classroom at the Marjory Stoneman Douglas High School days after a deadly shooting.

Alleged shooter Nikolas Cruz attended a school for behaviorally disabled students in 2015, according to local station WPLG-TV. Documents obtained by the station show that that school was aware he was “fascinated by the use of guns,” but after his behavior improved, he was allowed to transfer to Marjory Stoneman Douglas High School in 2016, from which he was later expelled.

James and Kimberly Snead took Cruz into their home in November.

“Everybody seems to know what we didn’t know. We had no idea. We knew he was depressed,” James Snead said.

Cara was 14. Family members say she loved her cousins and Irish dancing.

Gina was also 14. She was on the color guard squad at the high school. One of her guard instructors called her the “sweetest soul ever.”

Carmen was a 16-year-old straight-A student who had been accepted into the University of Florida Honors program. Her 17th birthday would have been on Wednesday.

Wang, 15, was buried today in his JROTC uniform along with the Medal of Heroism that was issued by the U.S. Army. Wang was also posthumously admitted to the U.S. Military Academy at West Point.

Some of the students attended funerals this morning, and said their fighting in the names of their friends.

When the buses roll in Tuesday evening, they will be greeted by local students. Wednesday morning they’ll split up into groups of 10 to meet with lawmakers. They know this will be a tough fight and they’re still discussing exactly what to ask for, but they say the important thing is to be heard.