In a six-month investigation, CBS News looked into the way sexual assault cases are handled by the United States Air Force Academy. On Monday, current and former cadets shared their stories. In the second part of our investigation, Teresa Beasley, the academy’s former top official on sexual assault prevention and response, reveals troubling information about the way she says cases were handled – and the academy is now responding to our reporting.

“Is the Air Force Academy supportive of those who report sexual assault?” “CBS This Morning” co-host Norah O’Donnell asked. 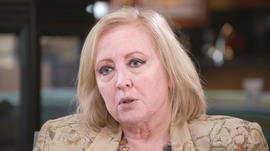 “I would have to say absolutely not. No,” Beasley said.

Beasley worked with sexual assault survivors for three decades – 10 of those years at the Air Force Academy.

“I think deep down they really don’t believe that sexual assaults are happening. I think they’re minimizing the severity of them,” Beasley said.

“Do you believe that there are some commanders at the Air Force Academy who believe that cadets are making up sexual assault charges?” O’Donnell asked.

“Absolutely,” Beasley said. “They would say it in words such as, ‘I find it interesting, the timing of this report.’ Or ‘I am just wondering why this cadet hasn’t come forward sooner with this assault.'”

Beasley also told us she believes the academy has covered up the circumstances surrounding two violent attacks on female cadets that occurred in December 2014 and January 2015 on the public running and biking trail behind the academy. The details have not been reported – until now.

“Were these attacks sexual assaults?”

“Yes,” Beasley said. “Both were hit in the head, hard enough to each receive a concussion. Both were hit from behind somehow. They couldn’t see anyone coming.”

Sources tell CBS News both cadets were administered rape kits at local hospitals. But Beasley said both cases were prematurely closed by the Air Force’s office of special investigations agents, or OSI.

“They, meaning OSI – told me that they didn’t believe her, that they think it was a date that went wrong. And I said how did – how did she – how did she get hit in the head? And they said, ‘Well, she’ll have to tell you that.’ And somehow her – it just – they never investigated it. … About a month later… we had a second incident. … She wasn’t believed either. They said she was making it up. And when I asked why, they said that, this was OSI, they said because her timelines don’t match.”

More than a dozen current and former cadets told CBS News they’ve experienced retaliation by their peers and their military leadership for reporting sexual assaults to the academy. That’s why some victims are afraid to sign a form called a 2910, which the academy uses to document assaults. CBS News obtained Defense Department memos that confirm at least 16 cases were deleted for academic year 2014 to 2015 for not having a signed 2910.

Beasley believes those cases should have been counted by the Air Force Academy, which she said would have resulted in a record number of cases that year.

“They were actual reports. These were victims that had come in and told their story and had received help, had assigned victim advocates, had been referred for medical counseling. They were actual victims,” Beasley said. “But they did not wanna sign a 2910 because they were afraid someone would find out.”

“Do you believe they removed those cases for a reason, other than they didn’t have that specific form signed?” O’Donnell asked.

“And what was that reason?”

“I believe they wanted to get that number down because it was… the highest we’d ever had,” Beasley said. “I was reprimanded. And they were trying to – they tried to fire me for what they said was intentionally over-inflating the numbers.”

“Do you believe you were retaliated against?” O’Donnell asked.

“I absolutely was,” Beasley said. She retired amid threats that the academy intended to fire her.

Two weeks ago, the academy released a scathing 560-page report of investigation into the office Beasley led and accused her of “failing to effectively manage” staff, “spreading rumors,” and that her office’s “lack of competency… jeopardized” victim care.

But Beasley, as well as some former colleagues and cadets who spoke with CBS News, believe the academy has scapegoated her for standing up to leadership on behalf of sexual assault survivors.

“You have to stand up to people who mistreat others and who oppress others. And I did that. And they didn’t like it,” Beasley said.

Retired Lt. Gen. Michelle Johnson, superintendent of the Air Force Academy from 2013 to August of this year, provided a statement: “During my tenure, I viewed those entrusted with the care of sexual assault victims as having a sacred duty. When members in the (Sexual Assault Prevention and Response) office demonstrated they were not up to that task, we immediately initiated an investigation, took actions appropriate to the findings, and worked tirelessly to ensure victims received the care they deserved. I am confident that we took every possible step to provide a safe environment at the Air Force Academy.”

Johnson also told us that the Air Force Academy and law enforcement investigated both the trail allegations exhaustively for several months.

Tune in around 8 a.m. ET on “CBS This Morning” where we will be joined in Studio 57 by the Air Force Academy’s new superintendent, Lt. Gen. Jay Silveria. He will respond as well.