How the Georgia Dome implosion was achieved

You are here: Home / Uncategorized / How the Georgia Dome implosion was achieved
This post was originally published on this site

When the Georgia Dome first opened 25 years ago, it was the largest covered stadium in the world. Since then the iconic venue hosted more than 37 million guests and more than 1,400 events, including the 1996 Olympics.

Now it’s a pile of concrete and steel.

It’s replacement, the new home for the Atlanta Falcons, sits just 83 feet away, posing a challenge for the demolition team as to how to go out with the old without damaging the new.

Twelve seconds: That’s all it took Monday morning to drop the 29-story Georgia Dome and reshape Atlanta’s skyline. But this explosive moment took nearly two years of planning and prepping. 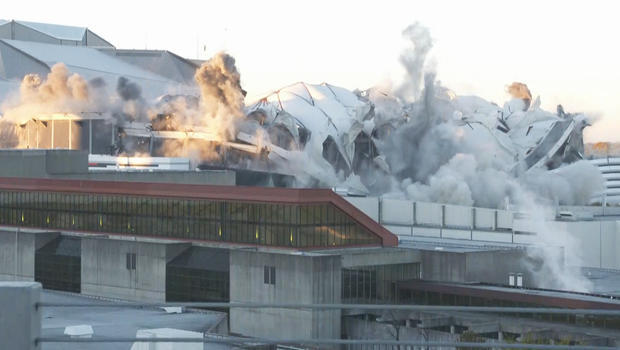 A glimpse inside the preparations taken to bring down the iconic Atlanta venue in just 12 seconds.

In its final days, the stadium looked like an apocalyptic ruin, and nothing like the familiar home turf of the Falcons for season ticket holders like Matt Dale. “The last time any fan got to step foot in here it was a little different scene,” he told correspondent Mark Strassmann. “For three years, I think I was section 119, which was somewhere over here, which looks like it’s just a pile of concrete now.”

Dale felt conflicted; his job has been to oversee the implosion of a venue that has staged a quarter-century of milestones and memories, including two Super Bowls and three Final Fours; and in 1996, this is where Team USA women’s gymnastics won their first Olympic gold. 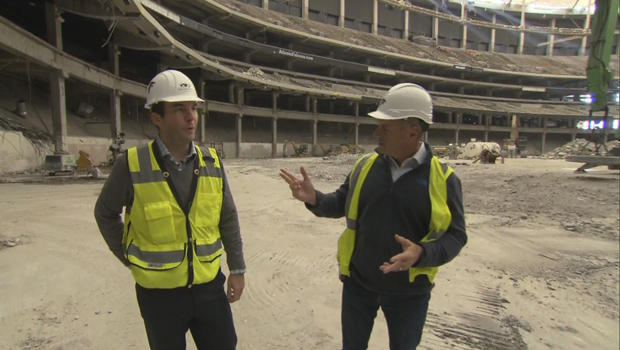 Rick Dale talks with Mark Strassmann about the demolition of the Georgia Dome, site of countless athletic landmarks.

“Any major event that came to Atlanta , if it came to the Dome, you knew it was a meaningful event,” Dale said.

“And deciding to get rid of a building like this is a complicated and frequently emotional decision,” said Strassmann.

“Absolutely. It was studied for a long time and debated, but I think [they] ultimately realized that, you know, in order to keep major events coming, that a new stadium was necessary,” Dale said.

The Dome’s lower bowl was first to go. 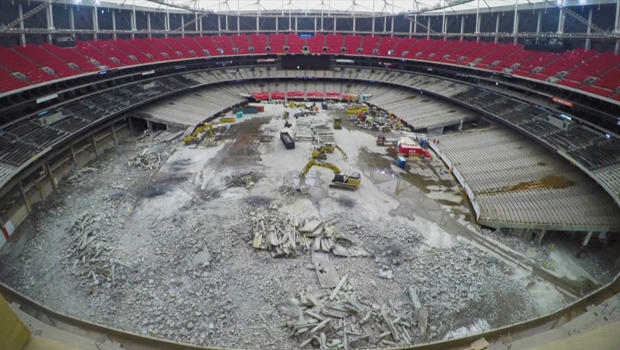 The lower sections of the Georgia Dome being demolished.

The dilemma: how to bring down the half-mile-long concrete ring beam that wraps around the roofline, a one-of-a-kind design.

And what was the solution?  “One implosion to do the entire structure,” Cuppetilli said. 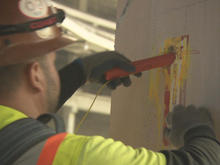 Two-and-a-quarter tons of explosives were placed throughout the structure.

Throughout the Dome, workers drilled 3,000 holes, and in those holes placed 4,800 pounds of explosives, all timed to cripple the ring beam and columns in just the right order.

For more than 40 years Steve Pettigrew has been making buildings go boom. He showed Strassmann some of the placed charges. “The sides will go off first,” he said. “Thirty-three milliseconds later, the center goes off.”

To protect it, workers raised a 50-foot tall curtain. 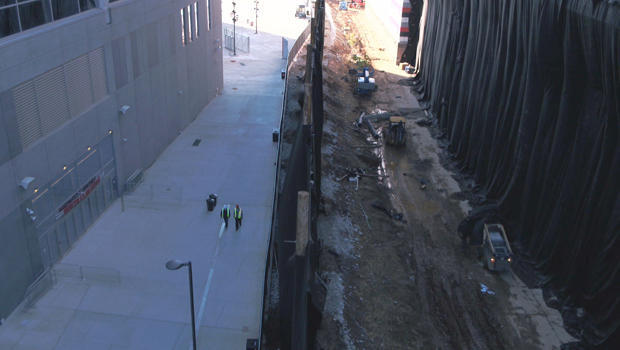 A 50-foot-tall curtain helps protect the Mercedes-Benz Stadium next door – just 83 feet away – from debris created by the demolition.

Rick Cuppetilli said the goal was “to keep everything inside the Georgia Dome. But just in case, once some walls collapse a piece of concrete, small, wants to flip out of there, this will stop it.”

And there’s a narrow zone in which to make this happen. “The Falcons have a game just six days after we drop this, so we’ve got to be careful,” said Matt Dale.

“Quadruple-checked the numbers, and we feel good, yeah.”

For all the planning, the venue’s final performance should have been no surprise – falling in a plume of smoke in a quarter-minute.

But all did not seemingly go according to plan. Parts of one section remained standing on the southeast corner of the stadium, while another section opposite it, on the northeast corner, did not implode with all the others.

Crews will have to figure out what to do with those two challenges.

So apparently the Georgia Dome still has one more final encore.