McMaster says evidence of Russian meddling is beyond dispute

You are here: Home / Uncategorized / McMaster says evidence of Russian meddling is beyond dispute

MUNICH — U.S. President Donald Trump’s national security adviser told an international audience that the evidence of Russian meddling in the 2016 American election is beyond dispute. H.R. McMaster was answering a question from a Russian delegate, shortly after Russian Foreign Minister Sergey Lavrov left the same stage at the Munich Security Conference on Saturday.

Referring to the indictment of 13 Russians announced Friday, McMaster said “with the FBI indictment, the evidence is now incontrovertible” of Russia cyber-meddling. He also scoffed at any move to work with Russia on cybersecurity.

“I’m surprised there are any Russian cyber experts available, based on how active most of them have been in undermining our democracies in the west,” he said to applause. “I would just say that we would love to have a cyber dialogue when Russia is sincere about curtailing its sophisticated form of espionage.”

Lavrov, just moments earlier, had dismissed the indictments as “just blabber” through an interpreter.

“Until we see the facts, everything else is just blabber — I’m sorry for this expression,” Lavrov said. 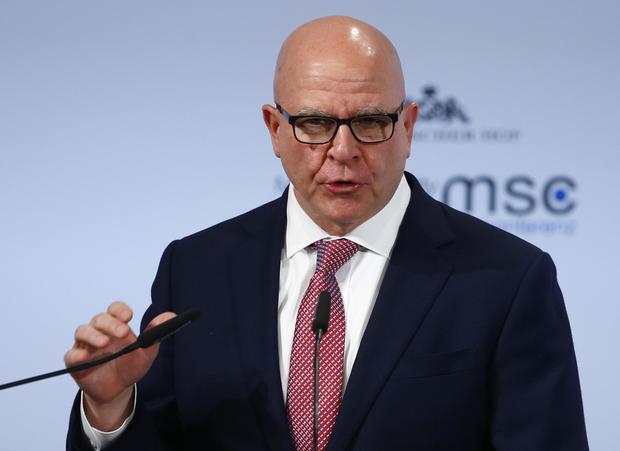 McMaster also said that Russians’ attempts to sow discord haven’t worked, and have united western polities and even the polarized U.S. Senate against Moscow, pointing out a vote on Russian sanctions that sailed through the upper chamber, 98-2.

Late Saturday, President Trump tweeted McMaster “forgot to say that the results of the 2016 election were not impacted or changed by the Russians and that the only Collusion was between Russia and Crooked H, the DNC and the Dems. Remember the Dirty Dossier, Uranium, Speeches, Emails and the Podesta Company!”

General McMaster forgot to say that the results of the 2016 election were not impacted or changed by the Russians and that the only Collusion was between Russia and Crooked H, the DNC and the Dems. Remember the Dirty Dossier, Uranium, Speeches, Emails and the Podesta Company!

The 13 Russians are charged with running a huge but hidden social media trolling campaign aimed in part at helping Republican Trump defeat Democrat Hillary Clinton. The indictment marks the first criminal charges against Russians believed to have secretly worked to influence the outcome.

According to the indictment, the Russian organization was funded by Yevgeny Prigozhin. He is a wealthy St. Petersburg businessman with ties to the Russian government and President Vladimir Putin.

Lavrov denounced “this irrational myth about this global Russian threat, traces of which are found everywhere — from Brexit to the Catalan referendum.”

Mr. Trump responded to the indictment Friday, asserting as he has in in the past that his campaign did not collude with foreign entities. “The Trump campaign did nothing wrong — no collusion!” he tweeted.

The White House also issued a statement from the president.

“It is more important than ever before to come together as Americans,” Mr. Trump said in the statement. “We cannot allow those seeking to sow confusion, discord, and rancor to be successful. It’s time we stop the outlandish partisan attacks, wild and false allegations, and far-fetched theories, which only serve to further the agendas of bad actors, like Russia, and do nothing to protect the principles of our institutions. We must unite as Americans to protect the integrity of our democracy and our elections.”