We’re far from CLEARING THE SMOKE over recreational marijuana use. A new federal policy announced this past week takes a tough line. It’s a challenge to states that have legalized use, including, most recently, the biggest state of all. Our Cover Story is reported by Barry Petersen:

“I’ve never experienced the spectrum of talking to cops while high,” laughed Alex. “So I’m like, ‘This is gonna be pretty cool!'”

It’s a sign of marijuana’s growing acceptance. During the Drug Wars in the 1980s and ’90s, stoners were afraid of cops. But at this workshop held in Sacramento, volunteers are showing law enforcement what it looks like when they’re too high to drive.

It’s illegal to drive under the influence of marijuana, but there is no definitive roadside test for impairment — no breathalyzer as for alcohol, so an arrest is often a cop’s judgment call.

“Some of the things that I would look for [are] some of the things our test subjects showed, which is difficulty following my instructions as I gave them, short-term memory loss,” said police officer Hal Larem. “Very consistent with marijuana.”

Attorney Chris Halsor started this program in Colorado when pot for recreational use became legal. Now, what he learned in Colorado is being taught in other states, like California, where legal recreational pot went on sale last week.

“We don’t want people who are lawfully doing something [to] be arrested when they aren’t impaired,” said Halsor.

“But we don’t want ’em driving on the road, either,” said Petersen.

Halsor laughed: “We don’t want them driving on the road!”

A little over five years ago, Colorado voted for what was called the “Great Experiment”: legal recreational pot. It was the first state where recreational pot went on sale, with long lines, in 2014. 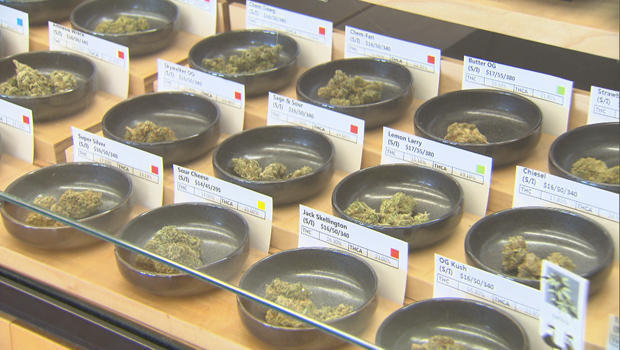 The legal cannabis industry is projected to reach $10.8 billion in sales this year.

Recreational pot is now legal in eight states plus the District of Columbia. Twenty-one additional states now allow sales of marijuana for medical use.

You might think by now the debate on pot good or bad would be diminishing. Not so … even as more states are allowing marijuana, opponents now think they have their best chance ever of shutting it all down.

This past week Attorney General Jeff Sessions told the nation’s U.S. attorneys they are free to prosecute those selling pot in states even where it is legal — a reversal of the policy under President Obama.

It’s unclear who, if any, U.S. attorneys will change their hands-off attitude about legal marijuana.

And Sessions drew angry fire from his own party, including Colorado’s Republican Senator Cory Gardner, who said Sessions went back on a promise to leave Colorado’s legalized pot business alone.

“This is about a decision by the State of Colorado,” Gardner said. “And we were told states’ rights would be protected!”

Sessions’ move has given encouragement to anti-marijuana groups, who are putting up billboards in Colorado. (“Are you better off that you were five years ago?” asks one sign posted by Marijuana Accountability Coalition.)

The state is NOT better off with legal pot, says Kevin Sabet, president of the bi-partisan group Smart Approaches to Marijuana (SAM), which supports a decrease in marijuana use.

“We are reintroducing the new ‘Big Tobacco’ of our time, ‘Big Marijuana,’ with all of the kinds of promotions that they are putting out there,” Sabet said. 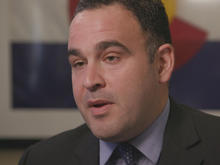 Sabet and others point to an increase in pot-related DUIs and traffic fatalities. But state officials warn that it’s too soon to know if that is a trend or just better reporting by police.

And Sabet says lobbyists want pot so pervasive you could even smoke it in restaurants. “We haven’t had smoking in restaurants in this country for 30 to 40 years,” he said.

Petersen said, “I don’t know anybody who’s lobbying for smoking in restaurants. There is a Denver, Colorado ordinance they’re talking about where you can smoke in specific designated places.”

“Oh, I’d be happy to introduce you to the D.C. lobbyists that have that on their lists, and absolutely are  –“

“Well, they’re not doing it here, because I live here.”

“Yeah, well, I mean, but there are people that are advocating for that,” Sabet said.

And in this heated debate, use by teenagers may be the hottest hot-button issue.

In a letter to Colorado’s governor last year, Attorney General Sessions, cited a federal study, showing marijuana use by young people in the state increased 20 percent since legalization in 2014. But that same study continued  to track use through 2016, and eventually showed a decline of 13.5 percent.

Petersen asked, “Is this an easier issue to deal with on a state level considering the partisanship we have in Washington now?”

“I think it is, in Colorado particularly. We work well across the aisle,” said that state’s Attorney General Cynthia Coffman, a Republican, she opposed legalized recreational pot, but thinks a shutdown by Sessions is a bad idea.

“I look at this as a state’s rights issue, and Coloradans have made the choice to legalize marijuana,” Coffman said. “I would not support the federal government coming in and reversing that decision for us.” 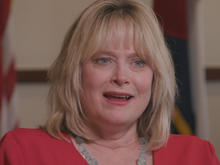 She says there are problems — the black market still exists, and pot gets illegally shipped across state lines. “So I would say we’re somewhere in-between great success and absolute failure. And we’re leaning towards success.”

And by any financial measure, marijuana in America has become a roaring success. The legal cannabis industry is projected to reach $10.8 billion in sales this year — larger than the sales of ice cream ($5.1 billion) or baby diapers ($6.4 billion).

And pot could provide as many as 177,000 jobs — more than double the number of jobs in the coal industry.

And judging by business at a recent pot trade show in Oakland, California, there are a lot more jobs to come in areas outside of pot, like what Nick Dinicola sells: insurance. 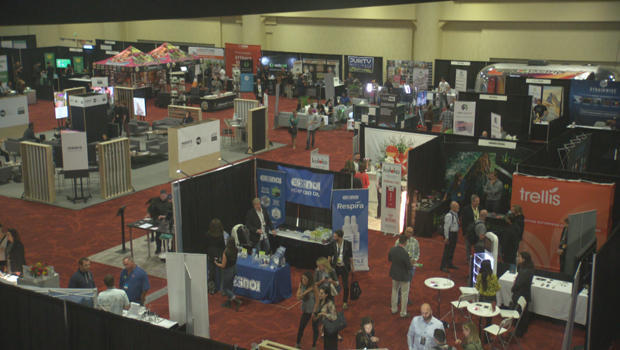 Exhibitors at a marijuana trade show in Oakland.

“Basically, anything that your standard business would need, except we specialize in doing that for the cannabis space,” Dinicola said.

“This is the kind of insurance General Motors buys?” Petersen asked.

Pam Hadfield co-founded Hello MD, which provides online matching of patients with medical resources. Her personal story is about an addiction to opioids she ended by switching to marijuana.

The lesson here? “This is a viable alternative to an enormous problem that’s gripping our entire country,” Hadfield said. 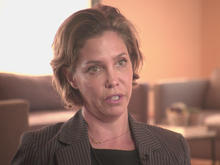 “It worked for me. And you could say that it’s anecdotal. And yet, we’re hearing from these people every day, ‘This has changed my life.'”

Here again, what could be another lesson to learn from Colorado, where opioid use has fallen since legal recreational pot was allowed.

And someday, Hailee Tougas might be one of those marijuana researchers. A pre-med student, she took California’s first-ever college course in marijuana, taught at the University of California – Davis.

“The weed class — that’s what my friends called it” she laughed. “It’s a physiology class. And you actually needed to take an upper-division physiology class as a prerequisite for the course.”

Among the discussions: marijuana’s potential to ease pain.

Petersen asked, “What would we lose in terms of its medical potential if marijuana was banned?”

“I think we would really being doing an injustice to a lot of patients,” Tougas replied.

But without extensive research, a lot of pot’s value remains more of a hopeful perception.

Other perceptions in Colorado are true (Yes, there really are more pot shops than Starbucks). Some are not (it’s against the law to smoke pot in public, and rarely do you see someone doing that).

And some perceptions are worth noting: Colorado Attorney General Coffman, who says the people have spoken.

Petersen asked, “Do you think the day will ever come when Colorado will basically roll back what it’s done with marijuana legalization?”

“I don’t. I don’t see that happening,” Coffman replied. “I think probably more people would vote for legalization if they had that opportunity now than last time.”