NYC terror suspect planned attack “for a number of weeks”

You are here: Home / NYC terror suspect planned attack “for a number of weeks”
This post was originally published on this site

NEW YORK — Police say the man suspected of deliberately mowing down bicyclists and pedestrians in lower Manhattan on Tuesday had been planning the terrorist attack “for a number of weeks” and closely followed instructions published online by the Islamic State of Iraq and Syria (ISIS).

John Miller, the deputy commissioner for counterterrorism for the New York Police Department (NYPD), said during a press conference Wednesday that 29-year-old Sayfullo Saipov had several pages of handwritten notes in the rental truck he used to ram into civilians, one of which said ISIS would “endure forever.”

Eight people were killed in the attack and 12 others were wounded, said Dan Nigro, the commissioner of the New York City Fire Department. Six people died on the scene, and two others died after arriving at the hospital. Nine people remain in the hospital, with four people critically injured but stable and five others seriously injured. One victim required a “bilateral amputation,” meaning the amputation of either both arms or both legs. 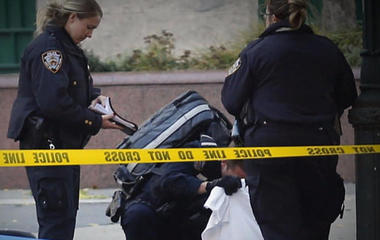 After the New York City terror suspect allegedly drove a rented truck through a crowd in downtown Manhattan, police shot and captured 29-year-old…

Several search warrants have already been executed in the initial stages of the investigation. FBI agents were seen leaving the home in New Jersey linked to Saipov on Wednesday morning, carrying several bags of material. Miller said hundreds of detectives and law enforcement officers were interviewing witnesses and people with connections to Saipov.

Saipov is a native of Uzbekistan who came to the U.S. legally on a diversity visa in 2010.

“He appears to have followed — almost exactly, to a T — the instructions that ISIS has put out in its social media channels before with instructions to their followers about how to carry out such an attack,” Miller said. Several national security experts told “CBS This Morning” that the attack was right out of the “ISIS playbook.”

Miller also provided an updated timeline of the attack during Wednesday’s briefing.

At 2:06 p.m., Saipov rented a pickup truck from a Home Depot in Passaic, New Jersey, according to Miller.

Saipov crossed the George Washington Bridge and arrived in midtown Manhattan at 2:43 p.m. He proceeded south down the West Side Highway toward lower Manhattan. 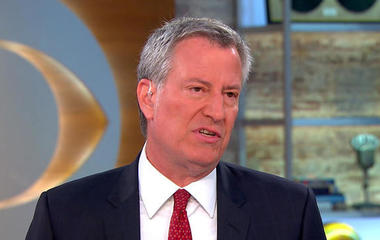 At 3:04 p.m., Miller said cameras outside the Holland Tunnel captured Saipov’s vehicle entering the southbound bike lane “at a high rate of speed” at West Street. and Houston Street. Miller said Saipov appeared to have been targeting bicyclists and pedestrians as he continued southbound. He eventually collided with a school bus at Chambers Street, injuring several others, and exited the vehicle with a paintball gun and a pellet gun, Miller said.

Dozens of 911 calls began coming in at 3:08 p.m. with reports of people down and a man with a gun. Two NYPD officers from the city’s 1st Precinct were nearby on another call and were alerted by witnesses about a man yelling and waving a gun.

The two were joined by a third officer and responded to the scene. Officer Ryan Nash, a 5-year veteran of the NYPD, fired his weapon and struck Saipov. Officials hailed Nash as a hero during Wednesday’s press conference.

As the injured were being removed from the scene, officers established a perimeter around the truck until a bomb squad unit arrived and cleared the area. Officers found knives in and around the rental truck as well as the notes expressing solidarity with ISIS.

Saipov was taken to Bellevue Hospital in Manhattan and remains in custody. Law enforcement sources tell CBS News he bragged about the attack and the amount of violence he was able to inflict.