Some frustrated parents of athletes who survived sexual abuse by Larry Nassar say they don’t care what happens to the former doctor, who was employed by the U.S. Olympic Committee (USOC), USA Gymnastics and Michigan State University. They want the institutions and the people who enabled him held accountable.

In a candid and at times emotional conversation with “CBS This Morning” co-host Norah O’Donnell, the parents — Kyle Keiser, Julie and Doug Powell, Gina and John Nichols, Lisa Lorincz and Christy Lemke — applauded Senate lawmakers’ call for a special investigation into the USOC and USA Gymnastics. 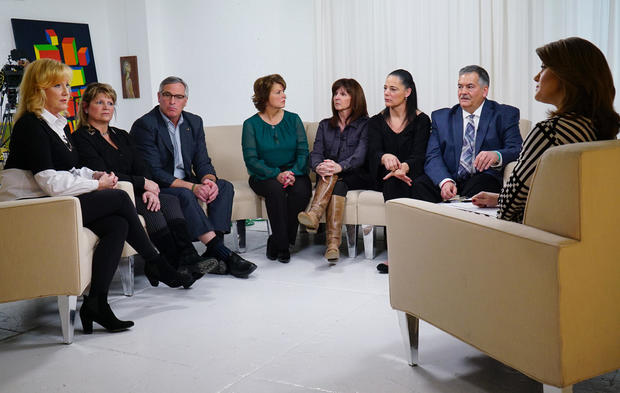 “If all of us are really going to heal, the parents and the girls, [then] we really need to know who enabled it. And that’s only going to happen from an independent investigation. So Larry going away was just kind of like the first chapter in the book. And the healing has started, but you can tell that there’s something still hanging out there that hasn’t been answered yet,” said Lisa Lorincz, mother of 18-year-old gymnast Kaylee Lorincz, who testified she was assaulted at 13.

“I don’t care about Nassar anymore. He’s gone,” said John Nichols, father of gymnast Maggie Nichols who was first abused in 2012 when she was 15 years old. “But these girls deserve justice. They need to know that this is never going to happen again. They need to know the enablers, whether they’re individuals, institutions, processes, whatever it may be, [are] eliminated, eradicated. That’s the only way that they’re going to be able to move on.”

More than 260 women and girls have reported being sexually abused by Nassar, who was sentenced to three prison terms, the longest of which puts him behind bars for up to 175 years.

“We talked to our kids as they grew up, and coming from a law enforcement background and perspective, nothing ever good happens after midnight. ‘Go home. Don’t do this. Don’t do this. Be conscious of what you’re doing.’ How do you guard from a doctor?” said Doug Powell, father of Michigan State University pole vaulter Kassie Powell who was assaulted at 16 years old. “How do you put that guard in your daughter’s mind? It’s a whole component of her college career that we never even thought to look at and guard her for and teach her to that. It’s saddening and sickening.”

Last month, the board of USA Gymnastics stepped down after the USOC demanded their resignations.

“I just want somebody to step up and say they’re sorry. That’s what I want,” said Christy Lemke, mother of current Michigan State gymnast Lindsey Lemke.

But the apology, for some, may come too late.

“I feel like now it would be forced,” Lorincz said. “The opportunity to say you were sorry and genuinely mean it, that ship has sailed. Now I don’t mean to sound like this, but now, I want people that were responsible to lose their jobs and not be able to do this to other, you know, parents and kids, primarily.”

In a statement to CBS News, USA Gymnastics said they “will hold the organization to the highest standards of care and safety in further developing a culture of empowerment for our athletes and members.”

After Nassar’s third sentencing, Michigan State University released a statement saying: “Nassar’s behavior was horrific and repugnant, and it is deeply disturbing to know that his crimes were often committed on campus. His sentencing of a few hundred years in prison will mean he will rightfully spend the rest of his life in behind bars. Now we must support the courageous survivors of Nassar’s abuse and provide them with the help they deserve. MSU is committed to making sure that we are doing what we must to provide a healthy and safe environment for all members of our community. President Engler has called for a culture change at MSU and we will be taking all necessary steps to begin a new day and improve the environment at the university.”

Last week, USOC announced an independent investigation into the Nassar abuse “to determine when individuals affiliated with USA Gymnastics or the USOC first became aware of any evidence of Nassar’s abuse of athletes, what that evidence was and what they did with it.” USOC CEO Scott Blackmun also released a statement of apology after more than 150 women and girls confronted Nassar and testified about his abuse in a Michigan courtroom.

Watch more of their conversation with Norah O’Donnell Thursday, Feb. 8, on “CBS This Morning,” which airs 7 a.m. to 9 a.m. ET/PT on CBS.