The recipe for success at one top-ranked restaurant called for throwing out everything — including the kitchen sink! Mo Rocca has the before and after:

If you’re skeptical that fine dining is an art, go inside Manhattan’s Eleven Madison Park. From the preparation of the food, to its plating, to the restaurant’s décor, no detail is too fine.

“Everything that we do, we try to do on a high level,” said chef Dabiel Humm. “So, if we serve you coffee, we want to make sure it’s a really good coffee, the best it can be.”

The restaurant was a bustling brasserie when chef Humm and business partner Will Guidara took charge in 2006. Under their stewardship it became more and more refined, and celebrated — until, last spring, it was named the number one restaurant in the world.

What better time, then, to shut the place down, and start all over again? 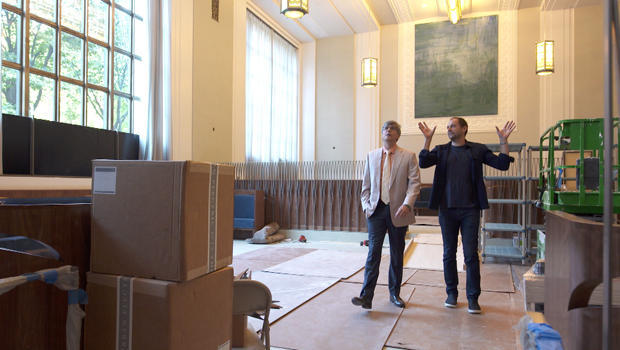 Chef Daniel Humm, with Mo Rocca, at Eleven Madison Park. The restaurant, which has been called the world’s finest, has just undergone a major renovation.

“In a way, it was kind of a beautiful thing, you know? It’s kind of like the unexpected,” said Humm. “Maybe it’s not the smartest thing from a business point of view, you know, closing when you have the most demand. But in a way, it’s kind of bad-ass, too!”

Over four months last summer, the dining room was stripped bare and the kitchen, where 70 chefs normally work, was gutted.

Much of the metal — pots and pans, cabinets and countertops – was repurposed by artist Daniel Turner.

Rocca asked, “So, you melted all the kitchen appliances, basically?”

“Yeah,” said Turner, “into this solid block that now will be the step into the new restaurant. The idea [is], you have to go through the past to be in the present.” 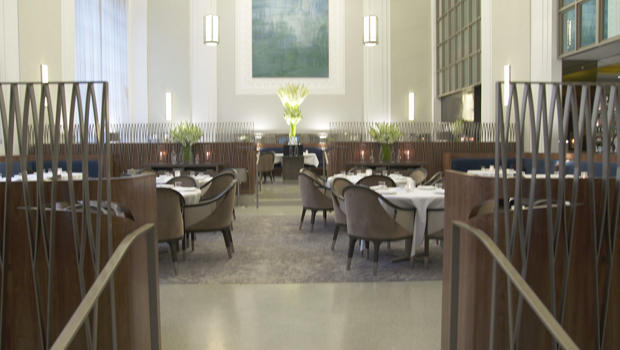 The New York City establishment Eleven Madison Park reached the pinnacle of fine dining – what better time to shut the place down and start all over again?

It may be new, but this Eleven Madison Park is even more in harmony with the historic Metropolitan Life building that towers over it.

“I love what you’ve done with the place!” Rocca exclaimed. “As soon as you come in it’s sort of, like, Gotham. It has a really classic,strong look.”

“This is such a historic building,” said Humm, “because the room is the greatest asset, and the architecture.”

Artist Olympia Scarry’s new windows are bringing new light to the space. “She’s worked with this amazing glass maker in Zurich, and she has made these painted glasses that are now going to be above the entrance,” Humm said.

And painter Rita Ackermann created what looks like, well, a smudged chalkboard.

“So this painting, she actually redrew the painting that was there before, and sort of erased it, with the theme we’re at the new beginning,” said Humm.

But of course, things actually begin back in Humm’s new kitchen, where things hum along with precision.

“This is really kind of a dream come true, because, you know, I’ve been here in this kitchen for 11 years, and I kind of in the 11 years learned what I want this kitchen to be — where I want my pots to be, where I want the stove to be, what we need,” he said.

In this kitchen, Humm is at the top his game.

One thing that hasn’t changed at Eleven Madison Park: It’s still a very expensive night out, at around $300 a person — about the price of a ticket to a hot Broadway show … and a responsibility that Humm says he doesn’t take lightly.

“Anyone who walks through these doors, you know, they maybe waited a long time to come here,” he said. “And maybe they saved up for it, to come here.  And they want to have a great experience. And we have the responsibility to hopefully deliver.”

“There’s actually a favorite saying by an artist I like very much, his name is William de Kooning — ‘I have to change to stay the same,'” Humm said. “And I feel very much that it’s so true for this restaurant. If we would stop changing, we would lose who we are.”