You are here: Home / Uncategorized / Remembering 1968: The Tet Offensive

1968 was a year like no other, and throughout this year “Sunday Morning” will be taking occasional looks back.

We begin this morning in Vietnam, with the Tet Offensive, which began 50 years ago this coming Tuesday. David Martin has the story of the conflict in one frontline city:

The 26-day battle for Hue was fought street by street, house by house, room by room. Two-hundred-and-sixteen American troops were killed and another 1,300 were wounded.

“Many think we’re hurting real bad right now,” said one Marine during the battle. “We lost 2nd Platoon.  They were wiped out.  And as far as 1st Platoon, they lost a lot of people.”

Ten-thousand North Vietnamese and Viet Cong had seized Hue at the outset of the Tet Offensive, and the Marines were sent in to claw it back.

“If there’s anything close to Hell, it had to be Hue,” said Sgt. Bob Thoms, wounded six times but still alive today. He led an assault on a tower the enemy was using to shoot down upon American troops. 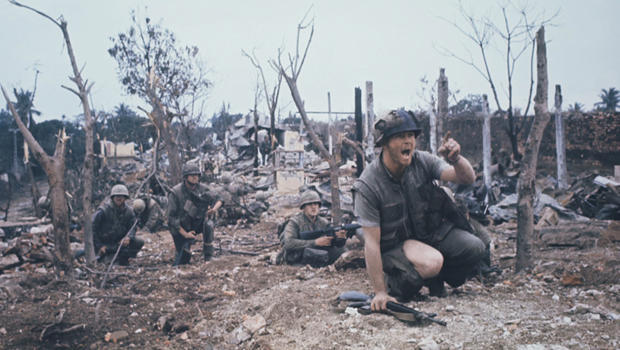 Sgt. Bob Thoms leads his Marines during the Tet Offensive. In early 1968 U.S. Marines fought for nearly a month in Hue, Vietnam.

The night before, he had joined his Marines in prayer. “Everybody held hands,” he recalled. “This was our prayer: ‘God, we know we are about to see you in person.  If we got to die on this tower let us die like men and Marines and don’t embarrass ourselves, our families or the Marine Corps. Amen.'”

John Olson, then a 20-year-old Army photographer, described one of the images in this exhibit, of the first 12 men that went up the tower: “And within 30 seconds, five of them were critically injured.”

Among Olson’s extraordinary photos: A wounded Marine  in agony, wrapped in a blanket, whispering the Lord’s Prayer as his life slips away and another wounded Marine stands guard. 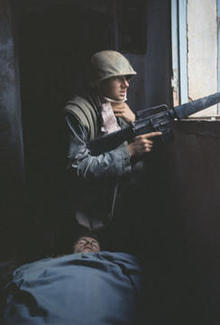 One wounded Marine stands guard over another.

“It was a totally new combat experience for all these men,” said Olson. “They’d never been in house-to-house fighting before.”

Olson’s photos are now on exhibit at the Newseum in Washington, D.C., to mark the 50th anniversary of the Tet Offensive.

Walter Cronkite, America’s most trusted newsman, went to Hue, the longest and bloodiest battle of Tet.  “If you had to choose the most important event of the Vietnam War it certainly would be the Tet Offensive; it changed how people looked at the war and doing so it changed the war itself,” Cronkite said on a CBS News special report, broadcast on February 27, 1968.

He’d come back to tell the public the war could not be won: “It seems now more certain than ever that the bloody experience of Vietnam is to end in a stalemate,” Cronkite said.

Nothing delivered that message more vividly than Olson’s photo of wounded Marines being carried out of Hue on a tank. 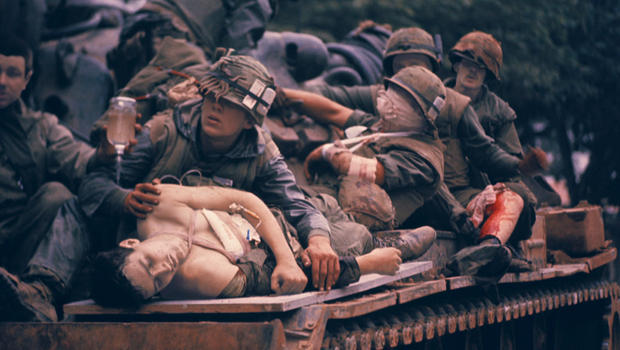 Americans, wounded during the Battle of Hue, being transported on a tank.

The shirtless figure — an 18-year-old Marine shot through the chest — is a symbol of American innocence shredded by the reality of Vietnam. His name is A.B. Grantham.

“I remember it well,” said Grantham, now 68 years old, of having come as close to death as it is possible to come.

“It was what we call a sucking chest wound — hit the breast bone, went through the right side and exited under my shoulder blade,” he said.

Martin asked, “Was it painful?” 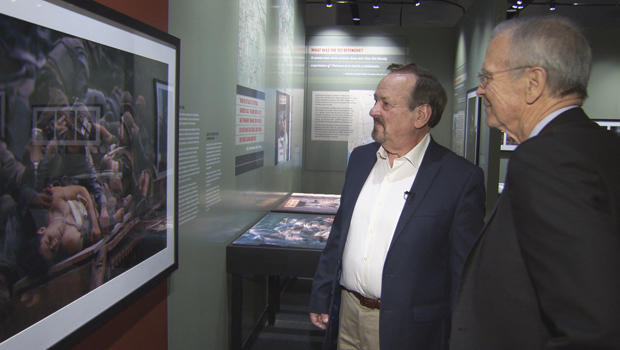 A.B. Grantham examines a photo of himself, wounded, in a photo at the Newseum exhibition, “The Marines and Tet.” With correspondent David Martin.

“How did they stop the bleeding?”

“The bleeding wasn’t the main problem to begin with; it was the breathing,” Grantham said. “I couldn’t breathe because I had a hole in my chest.”

“How close did you come?”

“I don’t think it could have gotten any closer,” he said. “They had zipped me up into a body bag. And I remember somebody saying, ‘This one’s not dead yet,’ and lo and behold, they got me out and I made it.” 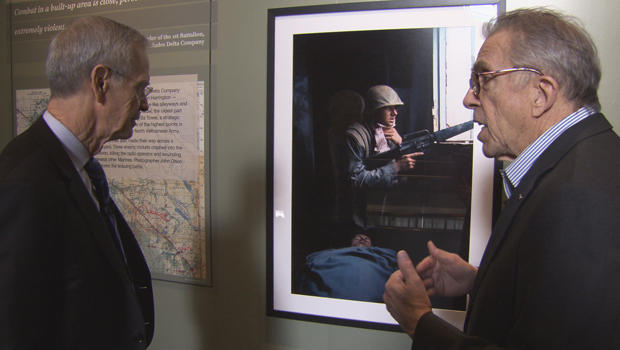 Correspondent David Martin with photographer John Olson, at the Newseum exhibition, “The Marines and Tet.”

None of the Marines on the tank were identified, and that was fine with Grantham, who didn’t want people to know he had been to hell and back.

“Tried to hide back into society and just fade away, you know, and just be like everybody else and live a nice, normal life,” he told Martin. “But it didn’t last. The war has a way of rearing its ugly head from time to time. Once you learn something, it’s hard to unlearn it.”

“What did you learn?” Martin asked.

“I learned that humanity can be very cruel to each other.” 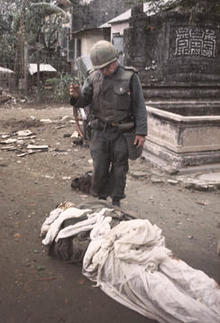 Grantham was diagnosed with severe and chronic PTSD. For 29 of the past 50 years, he has been in therapy, and doesn’t go anywhere without his service dog, Bo.

“There was a lot of memories, a lot of nightmares, a lot of resentment to what had happened to us and what we were put through,” he said.

The Vietnam War still rears its ugly head, but Grantham is hiding no longer. Fifty years after Tet, the Marine on the tank says it’s time to see that war more clearly.

Grantham said, “I’m hoping that the public can embrace the war now and they can learn exactly what happened and what went on, and that we had many, many, many heroes that didn’t come back with us from over there alive.”