Russian opposition leader arrested in Moscow on day of protest

You are here: Home / Uncategorized / Russian opposition leader arrested in Moscow on day of protest

MOSCOW — Russian opposition leader Alexey Navalny was wrestled to the ground and forced into a police vehicle Sunday as he headed to a Moscow protest that was part of a day of nationwide demonstrations.

Navalny, the most prominent foe of President Vladimir Putin, organized the protests to urge a boycott of Russia’s March 18 presidential election, in which Putin is sure to win a fourth term.

The anti-corruption campaigner was denied permission to be a presidential candidate because of an embezzlement conviction in a case widely seen as politically motivated.

Sunday evening, the Reuters news agency reported that Navalny was released from police custody. Olga Mikhailova, his attorney, told Reuters that was let go without charge, but would have to face court at a later date.

If charged with violating laws on holding demonstrations, Navalny could face up to 30 days in jail, Reuters reported.

Sunday’s protests gathered crowds through the sprawling nation despite frigid temperatures. Navalny’s web page showed a small group of protesters in remote Yakutsk, where it was minus 45 Celsius (minus 49 Fahrenheit). 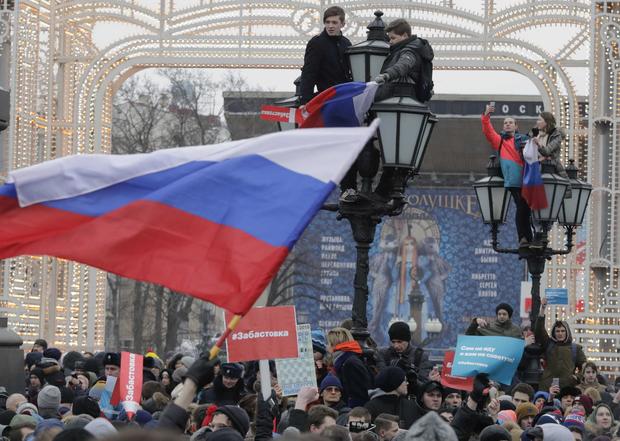 People gather in a square during a rally, held by supporters of Russian opposition leader Alexey Navalny for a boycott of a March 18 presidential election, in Moscow, Russia on Jan. 28, 2018.

A crowd that police estimated at 1,000 people assembled in central Moscow’s Pushkin Square, brandishing placards reading “They’ve stolen the election from us” and “Elections without Navalny are fake.” Navalny was arrested as he walked down a main thoroughfare to the demonstration. Video on his YouTube channel showed Navalny struggling with police before they pushed him to the ground and then into a bus.

Navalny is barred from Russian television but attracts a wide audience on YouTube and social media. He told “60 Minutes” in December that he has raised almost $4 million from Russian supporters.

He called on supporters to continue the demonstrations despite his arrest.

“They have detained me. This doesn’t mean anything,” he said on Twitter. “You didn’t come out for me, but for your future.”

Hours earlier, police raided Navalny’s Moscow headquarters, where there is a studio for live video transmissions. One broadcaster on the stream said police apparently were using a grinder to try to get access to the studio.

The anchors said police said they had come because of an alleged bomb threat.

One anchor, Dmitri Nizovtsev, was detained by police during the raid, according to video broadcast by the headquarters. Navalny’s Moscow coordinator, Nikolai Lyaskin, also was detained Sunday, the Interfax news agency quoted him as saying.

Demonstrations were reported throughout the country. Local news reports said about 1,000 Navalny supporters were marching in St. Petersburg.

The OVD-Info group, which monitors political arrests, reported scores of demonstrators had been detained at protests in cities including Murmansk, Ufa and Kemerovo.

Several hundred demonstrators assembled in the Pacific port city of Vladivostok, complaining both of Putin’s rule and of Navalny’s exclusion from the March 18 presidential election.

“They took these elections away from us, they took away our votes. Our candidate was not allowed to run,” said Vladivostok demonstrator Dmitri Kutyaev.

Navalny rose to prominence with detailed reports about corruption among top Russian officials, which he popularized on social media to circumvent state control of television.

Last year, he called for two demonstrations that attracted people throughout the country, undermining critics’ claims that he appeals only to a narrow segment of prosperous Russian urbanites.