You are here: Home / Uncategorized / Senate holds procedural vote to open debate on GOP tax plan
This post was originally published on this site 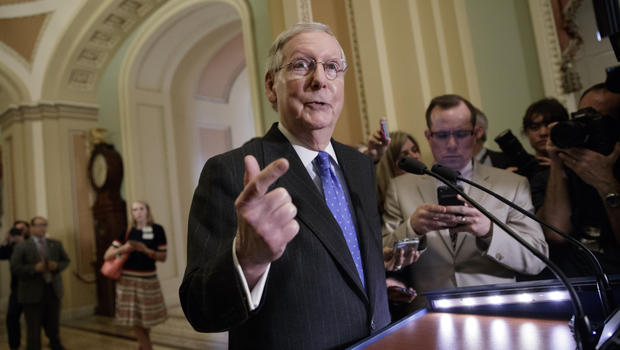 Senate Majority Leader Mitch McConnell, R-Ky., speaks to reporters about the struggle to move Supreme Court nominee Neil Gorsuch toward a final up-or-down vote on the Senate floor, at the Capitol in Washington, on Tue., April 4, 2017.

The Senate is holding a procedural vote on the GOP tax plan, with 51 votes needed to open debate.

Republicans need 50 “yes” votes and could use Vice President Mike Pence to break a tie.

A day earlier, Senate Majority Leader Mitch McConnell suggested that he was struggling to get all 52 Republicans in the upper chamber on board with their tax plan.

“It’s a challenging exercise,” the Kentucky Republican said about trying to appeal to members of his conference after they met behind closed doors with President Trump on Capitol Hill.  “Think of sitting there with a Rubik’s cube, trying to get to 50 (votes).”

Mr. Trump met with Senate Republicans for about an hour Tuesday afternoon.

Republicans are proposing to reduce most income tax rates for individuals and modify the tax brackets for taxpayers, increase the standard deduction and child tax credit and repeal deductions for personal exemptions, among other things. The bill would also repeal the individual mandate under Obamacare

The nonpartisan Congressional Budget Office (CBO) has projected that the GOP tax plan would increase the federal deficit by more than $1.4 trillion over the next decade and that it would increase taxes on low-to-middle-income people and benefit the wealthy.