You are here: Home / Uncategorized / Trump cites Kate Steinle verdict to justify construction of border wall
This post was originally published on this site

President Trump on Friday used what he called the “disgraceful verdict” in the Kate Steinle trial to justify construction of his proposed wall along the U.S.-Mexico border and warned Democrats that they’ll pay a “big price” in the next two elections.

Mr Trump blamed Democratic leaders Sen. Chuck Schumer, D-New York, and Rep. Nancy Pelosi, D-California, as well as former President Obama for the “weakly protected” border. This came after a Mexican man, Jose Ines Garcia Zarate, was found not guilty Thursday of killing Kate Steinle. Jurors did convict him of being a felon in possession of a firearm. It was a case that touched off a fierce immigration debate.

The Kate Steinle killer came back and back over the weakly protected Obama border, always committing crimes and being violent, and yet this info was not used in court. His exoneration is a complete travesty of justice. BUILD THE WALL!

The jury was not told the killer of Kate was a 7 time felon. The Schumer/Pelosi Democrats are so weak on Crime that they will pay a big price in the 2018 and 2020 Elections.

After the verdict Thursday, the president said it is “no wonder the people of our Country are so angry with Illegal Immigration.”

A disgraceful verdict in the Kate Steinle case! No wonder the people of our Country are so angry with Illegal Immigration.

Jose Ines Garcia Zarate had been deported five times and was wanted for a sixth deportation when the shooting happened. He said it was an accident. The jury found him not guilty on murder and manslaughter charges but he was convicted on a gun charge. 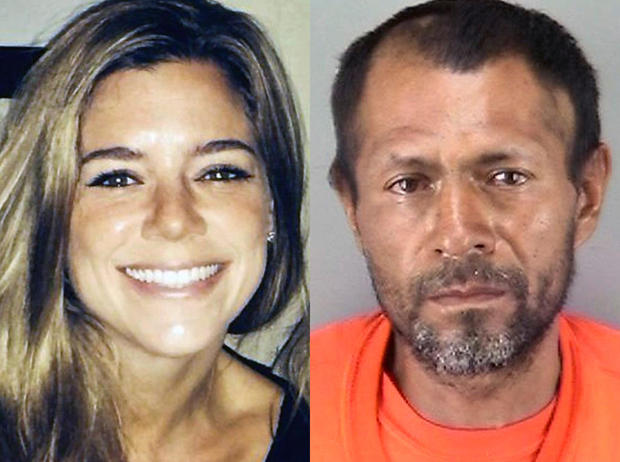 Under a sanctuary city law, the San Francisco sheriff’s department had released Garcia Zarate from jail despite a federal immigration request to detain him for deportation.

Immigration and Customs Enforcement (ICE) issued a statement calling Steinle’s death “unconscionable that politicians across this country continue to endanger the lives of Americans with sanctuary policies while ignoring the harm inflicted on their constituents.”

After Steinle’s death, Fox News has advocated for a law called “Kate’s Law” that would enhance penalties for convicted and deported criminals who reenter the United States illegally. But Steinle’s father, Jim Steinle, told the San Francisco Chronicle in a piece titled “Leave Kate Steinle’s name out of the immigration debate,” said “it certainly wasn’t us” who coined the phrase “Kate’s Law.”

Steinle’s family told the San Francisco Chronicle that they still supported santacutary cities, but they believed San Francisco when the former sheriff effectively ordered his department to cut off communication with federal immigration authorities.

Steinle’s brother, Brad Steinle, told the Chronicle in an interview published Thursday he was “just flabbergasted” by the “culmination of errors” that led to his sister’s death, with “failure number one” was federal authorities’ decision to Garcia Zarate back to San Francisco on a 20-year-old drug charge.

The statement ended with Sessions saying: “I urge the leaders of the nation’s communities to reflect on the outcome of this case and consider carefully the harm they are doing to their citizens by refusing to cooperate with federal law enforcement officers.”

Republican Sen. Ted Cruz (R-Texas) tweeted that he is “disappointed and angry” with the verdict.

I am disappointed and angry at the not guilty verdict for Jose Ines Garcia Zarate, an illegal alien who had several felony convictions & was deported from the US five times. Justice must be served for Kate Steinle. https://t.co/IxiL9WCU50