You are here: Home / Uncategorized / Trump hosts Hanukkah reception at White House
This post was originally published on this site 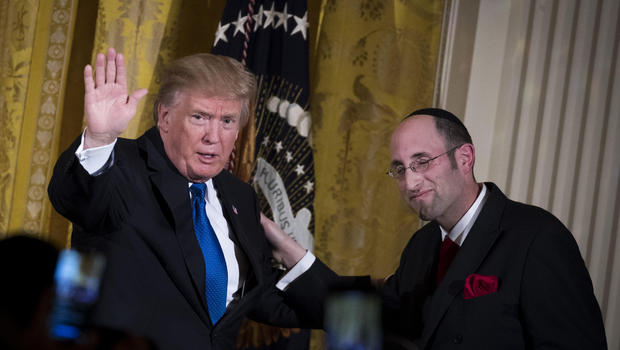 U.S. President Donald Trump waves as Rabbi Meir Soloveichik looks on during a Hanukkah Reception in the East Room of the White House, December 7, 2017 in Washington, DC. Hanukkah begins on the evening of Tuesday, December 12 this year.

President Trump hosted the annual Hanukkah reception at the White House Thursday evening, a day after his controversial decision to declare Jerusalem as the capital of Israel.

Mr. Trump began his remarks retelling the story of Hanukkah before congratulating the Jewish faithful in attendance for his decision one day earlier.

“Hanukkah is a time for Jewish families around the world to celebrate the miracles of the past and the promises of the future,” Trump said. “We are proud to stand with the people of Israel and renew our enduring bond.”

Thursday’s celebration comes one day after Mr. Trump’s announcement to recognize Jerusalem as the Israeli capital and plans to move the American embassy from Tel Aviv to Jerusalem. His decision was met with shockwaves throughout the world.

In Israel, Prime Minister Benjamin Netanyahu said his nation was “profoundly grateful” and that Mr. Trump’s announcement was an “important step toward peace.” However, Palestinian President Mahmoud Abbas said Wednesday that the U.S. shift “is a declaration of withdrawal from the role it has played in the peace process.”

Despite violent clashes between Israelis and Palestinians in the Jewish state that followed his declaration, Mr. Trump said Thursday his mind was all about the “love” happening there.

“I’m thinking about what’s going on and the love that’s all over Israel and all about Jerusalem,” he said.

Mr. Trump capped off his speech by introducing Louise Lawrence-Israels, a Holocaust survivor who lived the first three years of her life in an attic in Amsterdam.

“We thank god that a woman who was born into that nightmare of oppression now lives in this land of the free, and that she along with everyone here tonight can light the menorah for all the world to see,” Trump said.

Not present at the event were congressional Democrats and many Jewish leaders critical of the president, who were left off the invites, according to the New York Times.

According to the White House press pool, Hanukkah decorations were not also visible at the party, but just four large Christmas trees were.