Why has Trump decided to meet Kim Jong Un?

You are here: Home / Uncategorized / Why has Trump decided to meet Kim Jong Un?

President Trump is planning to meet the leader of North Korea, Kim Jong Un, apparently in a matter of just weeks. It would be the first time a sitting U.S. president has met a leader of North Korea. The two countries have been locked in a formal state of war since the onset of the Korean War in the 1950s.

“Great progress being made but sanctions will remain until an agreement is reached. Meeting being planned!” Mr. Trump said on Twitter.

It was a senior South Korean official who announced Mr. Trump’s acceptance of the invite extended by Kim, reports “Face the Nation” moderator Margaret Brennan. The South Koreans have acted as envoys between Washington and Pyongyang, and they say Kim has committed to denuclearization. The rogue regime has also said it will refrain from further nuclear or missile tests.

Kim Jong Un talked about denuclearization with the South Korean Representatives, not just a freeze. Also, no missile testing by North Korea during this period of time. Great progress being made but sanctions will remain until an agreement is reached. Meeting being planned!

South Korean national security director Chung Eui-yong made the stunning announcement Thursday evening outside the White House that Kim wanted a face to face encounter with the American president.

“He expressed his eagerness to meet with President Trump as soon as possible. President Trump appreciated the briefing and said he would meet Kim Jong Un by May to achieve permanent denuclearization,” Chung told reporters.

Chung had just delivered the message from North Korea to President Trump, which had been conveyed to him by Kim Jong Un himself during an hours-long dinner Monday in Pyongyang.

The yet-to-be-scheduled meeting is not without significant risk; both men are unpredictable and have little diplomatic experience, and there’s a void at the State Department. The lead U.S. diplomat on North Korea is quitting, and the president has not yet appointed an ambassador to South Korea.

It is quite a turnaround from Mr. Trump from the heightened tension of the past year, during which time the president regularly ridiculed Kim. Just last August he threatened to “unleash fire and fury” on North Korea if provoked.

“Rocket Man is on a suicide mission for himself and for his regime,” Mr. Trump said mockingly of the North Korean leader in September.

Kim called the president a “dotard” and said he was “mentally deranged.” 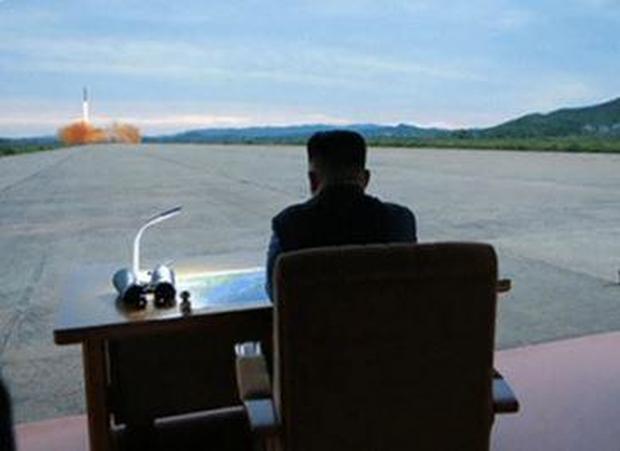 A still photograph broadcast by North Korean state television on Aug. 29, 2017 purportedly shows the country’s leader, Kim Jong Un watching the launch of a Hwasong-12 ballistic missile from a site near Pyongyang. The missile flew over the northern Japanese island of Hokkaido before splashing into the sea east of Japan.

But after the North and South re-opened talks during the Winter Olympics in Pyeongchang, Mr. Trump signaled that a meeting with Kim was possible.

“We’re in very close contact, we have come certainly a long way,” he said earlier this week.

On Thursday, Secretary of State Rex Tillerson expressed skepticism about talks — or at least “negotiations,” saying the latter was still “a long ways” off — but on Friday morning he claimed a “dramatic” change in Kim’s stance had led Mr. Trump to agree to a meeting.

“This was the most forward leaning report that we’ve had in terms of Kim Jong Un’s, not just willingness, but his strong desire for talks. So I think really what changed was his posture, in a fairly dramatic way in all honesty. That came as a little bit of a surprise to us, as well that he was so forward leaning in his conversations with the delegation from South Korea,” said Tillerson. 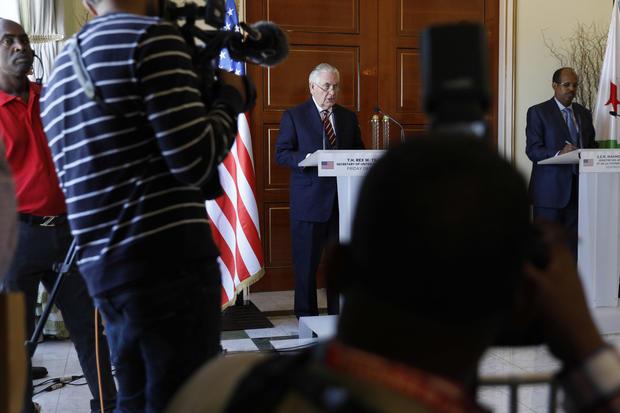 He said it was the change in stance from North Korea that surprised him, not Mr. Trump’s acceptance of the invite.

“President Trump has said for some time that he was open to talks and he would willingly meet with Kim Jong Un when conditions were right, the time was right,” Tillerson said. “And I think in the president’s judgment that time has arrived now.”

Secretary Tillerson also said it would take “some weeks” to arrange the meeting.

The president, anxious to get the word out about his potential meeting with Kim, personally alerted reporters Thursday night that a major announcement from the South Koreans was coming.