You are here: Home / Uncategorized / Winners, highlights & best moments from the Oscars

Host Jimmy Kimmel is opening the Oscars by making a jab at last year’s flub, saying that the PricewaterhouseCoopers accounts wanted to do some comedy on their own.

Kimmel addresses the #MeToo movement head-on by saying of the Oscar statuette, “Oscar is the most beloved and respected man in Hollywood … just look at him. Keeps his hands where you can see them. Never says a rude word, and most importantly, no penis at all. He is literally a statue of limitations. And that’s the kind of men we need more of in this town.”

He also cracks, “Here’s how clueless Hollywood is about women. We made a movie called ‘What Women Want’ and it starred Mel Gibson. That’s all you need to know.”

Kimmel points out that though Harvey Weinstein was expelled from the Academy after the myriad allegations of sexual assault against him, another Academy member got the same treatment for “sharing ‘Seabiscuit’ on VHS” with a neighbor.

Kimmel says he wants there to be real change in Hollywood for women so that “women will only have to deal with harassment at every other place they go.” He says he wants the audience to listen to the supporters of #MeToo and Time’s Up.

The Oscars host is praising the success of “Black Panther” and “Wonder Woman.” He points out that Greta Gerwig is the fifth woman nominated for a best director Oscar, and talks about the disparity between pay between Mark Wahlberg and Michelle Williams.

Kimmel also cracks that Donald Trump calls the “Get Out” the best first three-quarters of a movie and “Call Me By Your Name” was made to upset Mike Pence.

He encourages people to change the world by opening a dialogue with others or joining the students of Parkland in their march on the 23rd.

Kimmel closes his monologue by saying that the Oscar winner with the shortest speech tonight will win a jet ski, pointing to Helen Mirren as she shows off the jet ski. 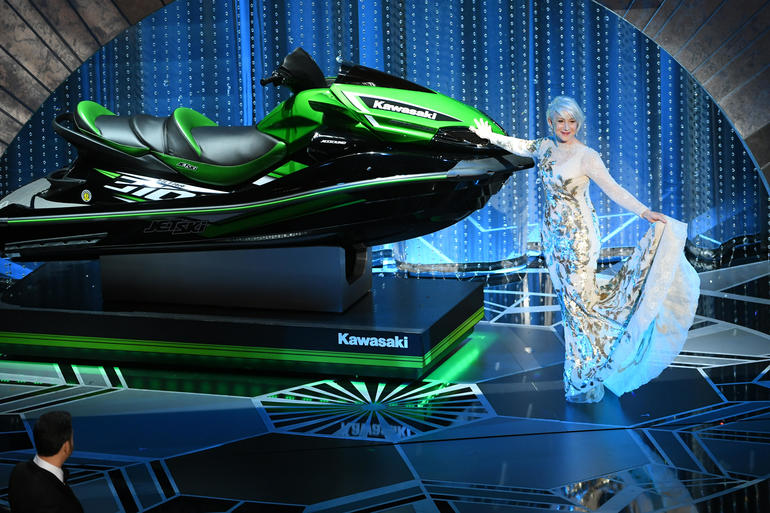 Helen Mirren speaks onstage during the 90th Annual Academy Awards at the Dolby Theatre at Hollywood & Highland Center on March 4, 2018 in Hollywood, California.